Today I had the very sacred experience of witnessing a fallen soldier returning home to his family in Houston. 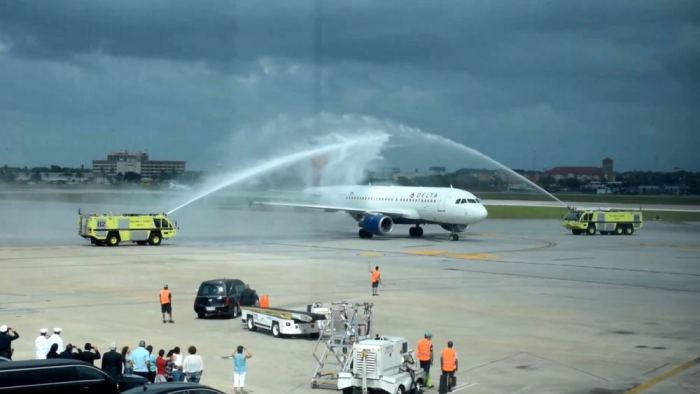 As I was walking up to gate 32 at Hobby Airport, I saw a few people standing around the window looking out to the tarmac.  I looked at the end of the jetway and saw that there was no plane at the gate.  I soon noticed what was going on at the empty gate.

I saw a hearse, a color guard, some men dressed in Navy whites and some other men in military and police uniforms. I saw the airline luggage unloader parked next to the hearse.  I figured out that a fallen hero would be returning on the plane I was taking home to Atlanta.

Moments later the plane was visible in the distance.  It made a slow turn toward the gate and rode between two fire trucks. The fire trucks showered the plane as it went between them.  I have seen this done before when troops were coming home in celebration, but I had never seen it before to honor the fallen.

After the plane taxied to the gate, the honor guard, pall bearers, and family moved into place to watch the casket come off the plane and be loaded into the hearse. As a crowd was staring out the window watching this along with me, the only thing I heard was sniffling noses. There were no announcements.

I noticed that other planes on the tarmac had come nearby the gate and turned and parked facing the unfolding ceremony.  Even though this particular plane was a Delta aircraft, both Southwest and USAir jets stopped out of respect.

After the families returned to their vehicles, the motorcade rode off the tarmac.

I then saw the usual gate Delta gate agent come back up the jetway after helping facilitate the ceremony. You could see he was moved.  He went to the gate and spoke to the waiting travelers, “Ladies and gentleman. I want to apologize for the delay boarding our flight. Onboard the incoming flight was a fallen hero who was being returned home to his family. For that reason we are delayed. We will be boarding in a few moments. Again, I apologize for the delay.”

The video below was my best attempt to capture this scene.  It is not very good, but I think it will give you a sense of the experience.