Friday was my birthday. Harrisen and I just started talking and decided that we should take a trip somewhere. We decided that after he got off work Saturday we would immediately head out to Capitol Reef National Park.  Neither of us had ever been there.

Our goal was to arrive before sunset but we missed it by about an hour because I was delayed by tubing the Provo River with the girls earlier in the day.

We wanted to shoot some night pix and use the telescope on a dark sky. Harrisen did hook up a pretty cool view of the Milky Way, but my photos were AWFUL. I am doing something wrong with my night shots and I will need to consult with Richard Barron to figure out what I am doing wrong.

Other than the night shots, our next major destination was Hickman’s Bridge as shown below. We got up at dawn and made the 1 mile hike to the bridge. We were the only ones on the trail for about an hour.

A couple more images from the bridge. 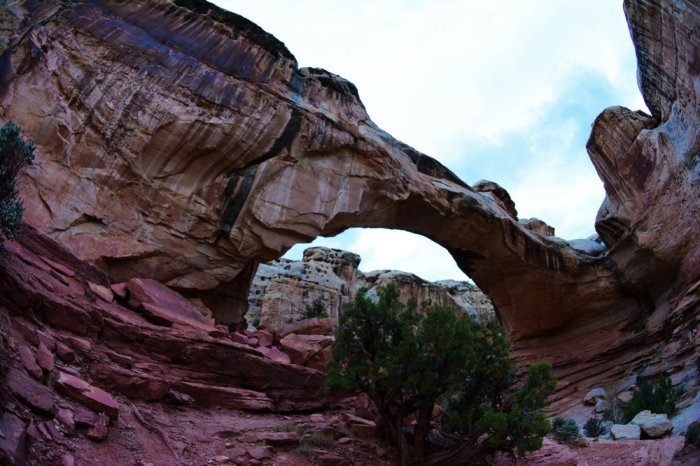 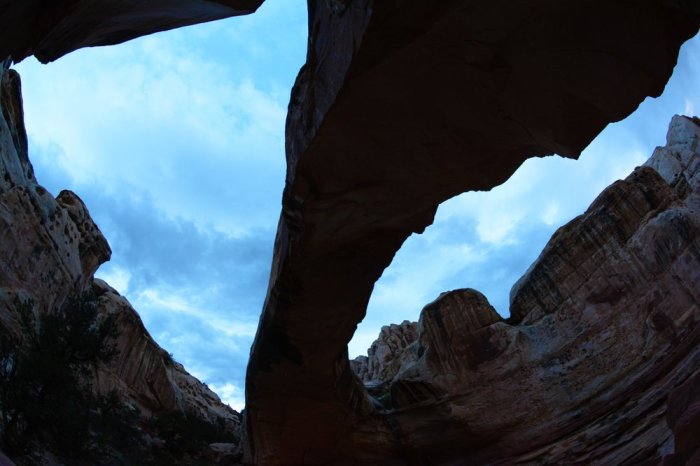 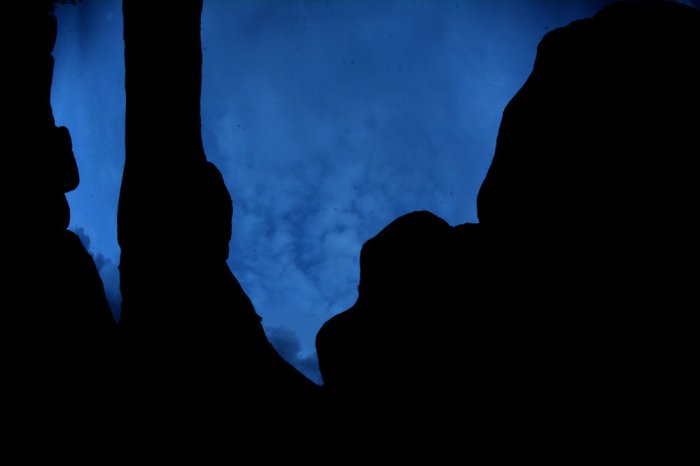 We saw lots of stuff as shown below in the photos. There was an old schoolhouse from around 1890 that was pretty cool. Of course, lots and lots of rock formations caught our eyes. The first one shown below reminded Harrisen and I of the tabernacle in Salt Lake. 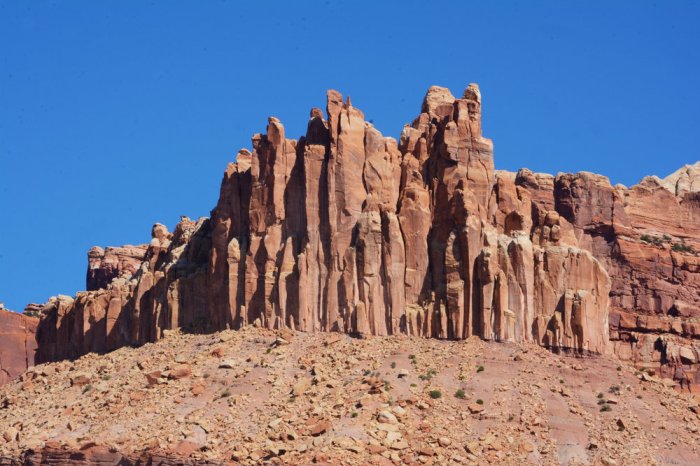 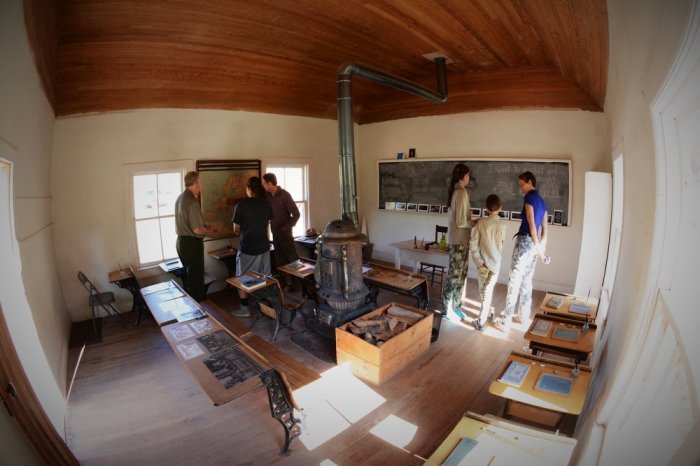 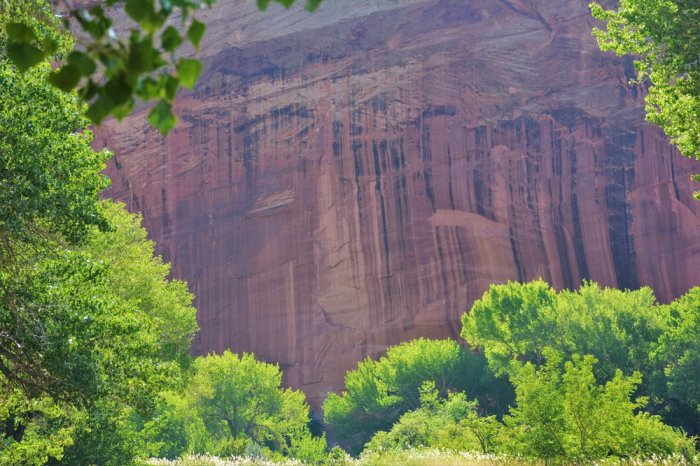 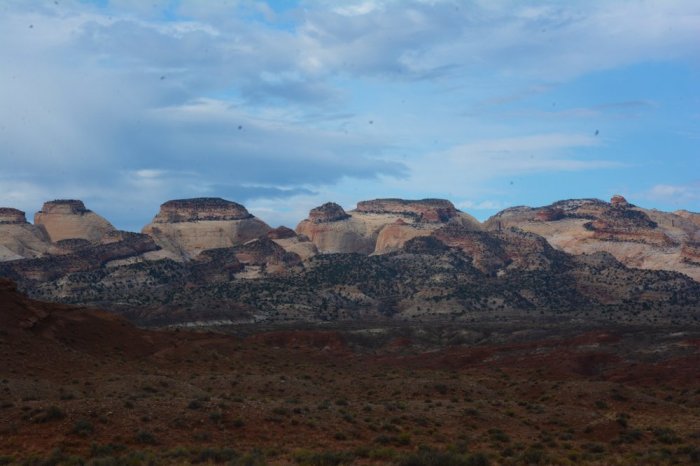 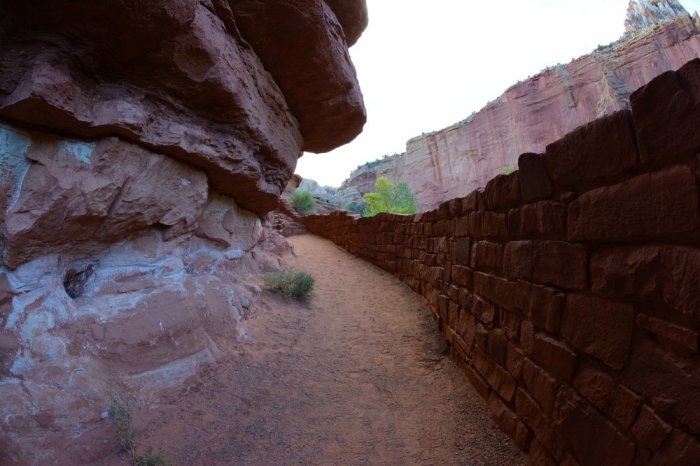 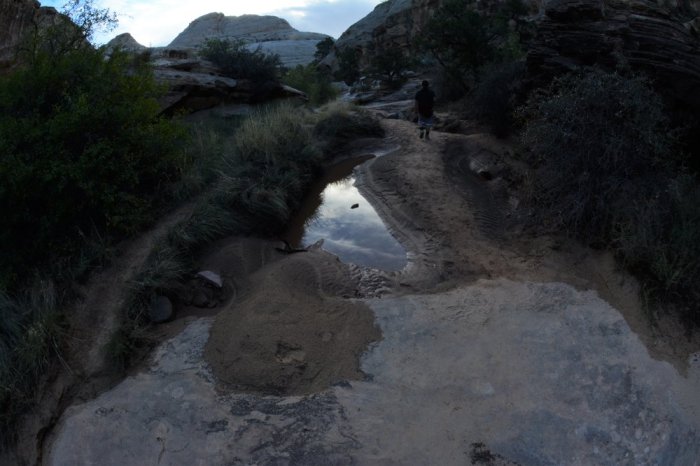 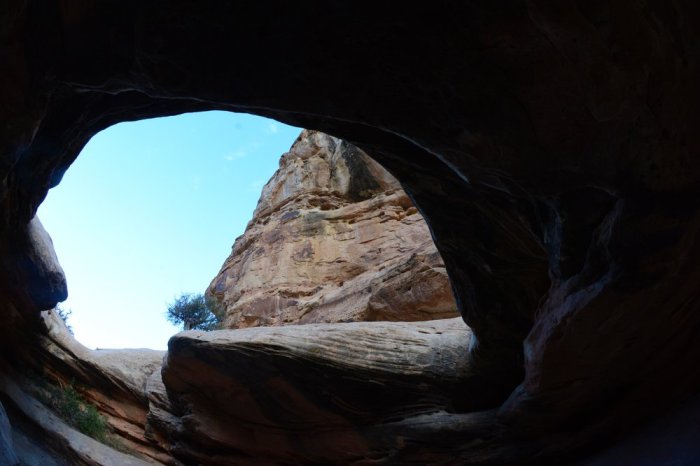 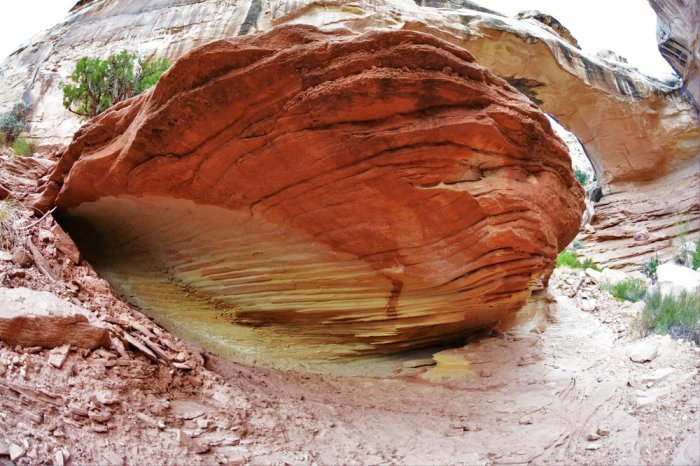 One of the cool sights was seeing the petroglyphs made by the Fremont Culture Native Americans. We aren’t sure who they were, but they got that title due to the nearby Fremont River. 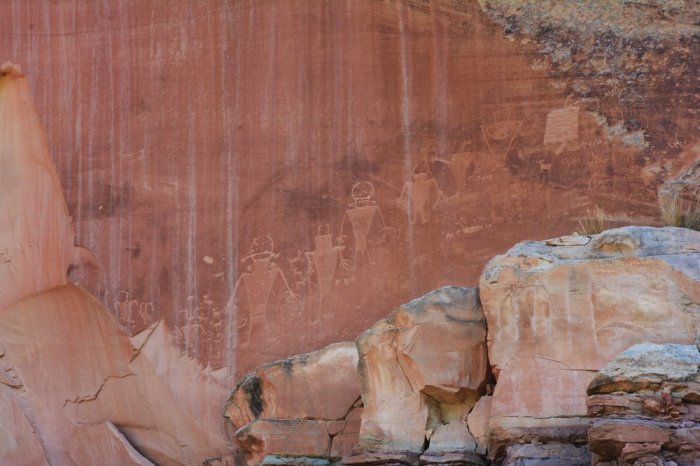 Super cool thinking about Native Americans drawing these many moons ago.

As we were driving around, Harrisen and I had a running joke about how long it would take him to run up the hills we saw. Toward the end of our visit, he saw the big hills below that we adjacent to Chimney Rock. Well, he attempted to climb, as shown in the photos and then his trip down was more fun, as shown in the video. 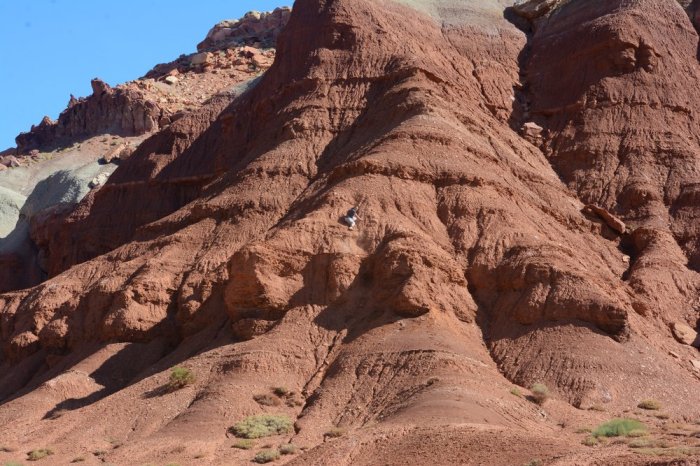 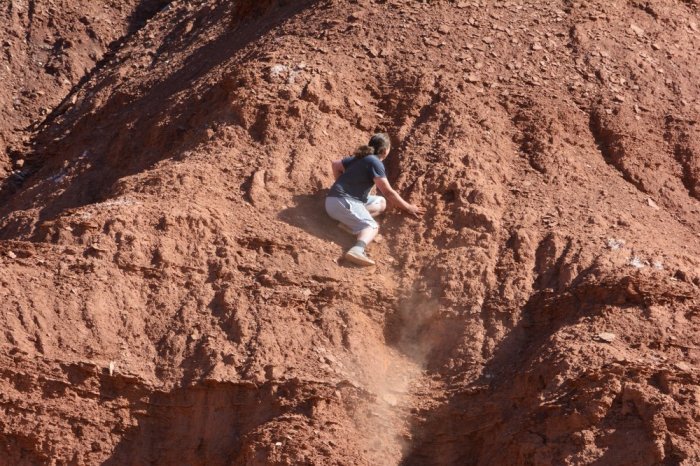 The thrill seeking by Harrisen continued at a scenic lookout. He saw that someone had started a cairn on the tip of a treacherous formation and naturally, he had to add to it. You will notice in the last photo below, that the rocks were blown off moments after he added them. 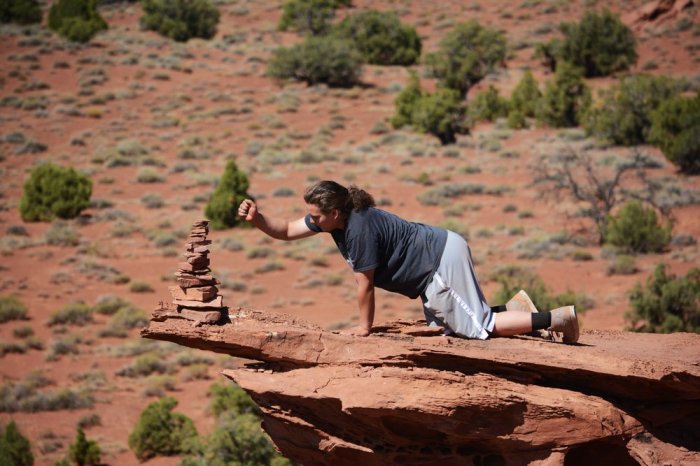 Harrisen literally goes out on a ledge 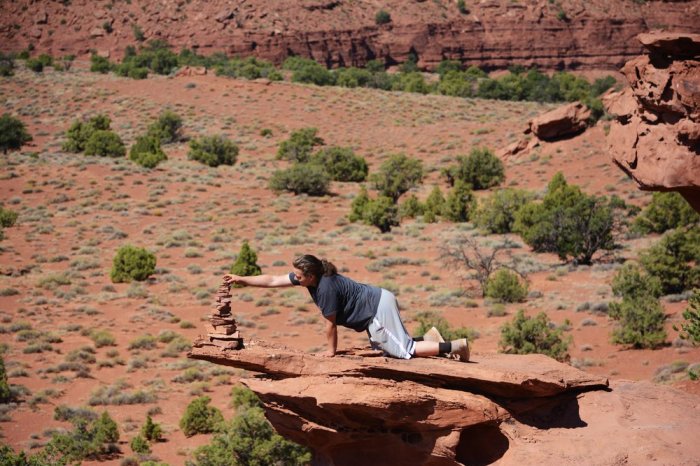 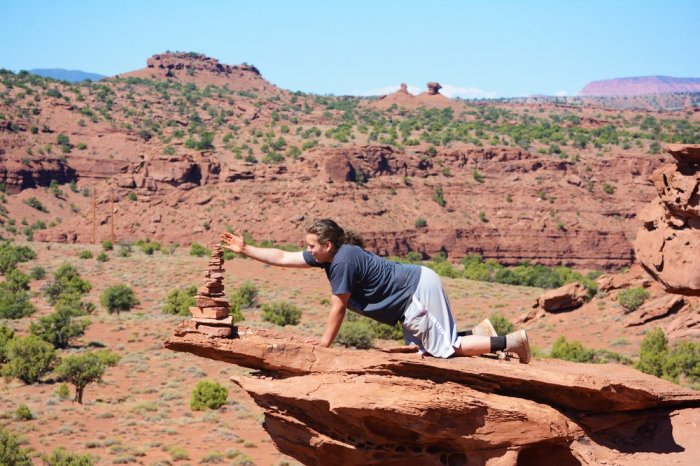 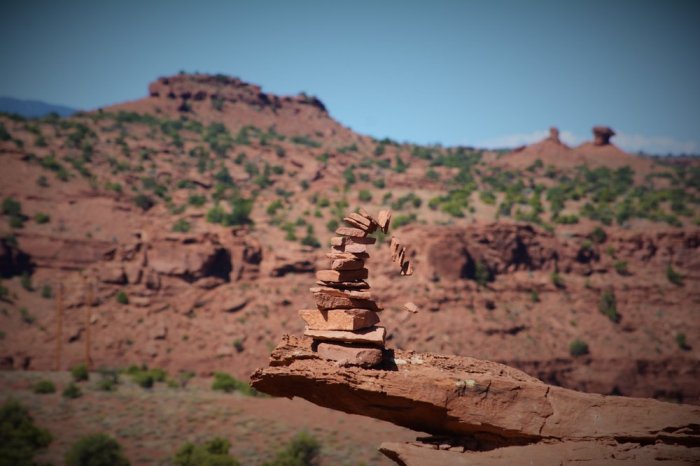 One last feat…jump across formations. 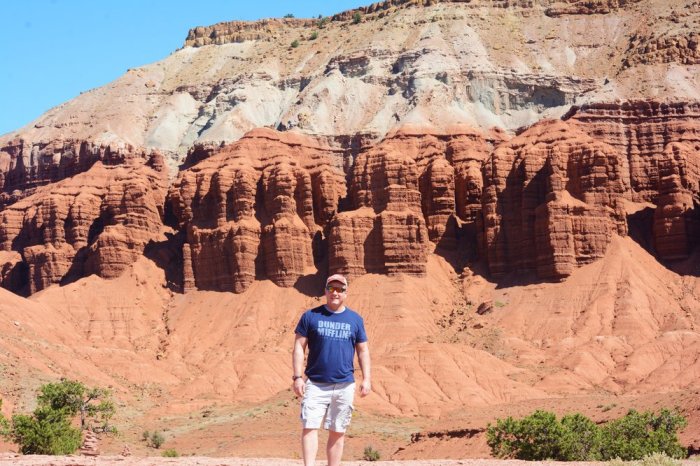 Summer in the High Country