Loyal readers here know that I am cyclist. I love to ride. I enjoy the exercise, the mental break, and even the strenuous moments when I feel like I want to stop.

One of the best things about riding are the extra benefits I get from the scenery, places, and people I see and meet while riding.

This past weekend is a good example. I rode both days.

On Saturday I rode the Utah Valley Astronomy Club’s Solar Party at a local park. I was able to meet club members and look at the sun through several really cool telescopes. I was able to see sunspots and the soft edge of the sun.

The members were very friendly and I chatted with them for about 30 minutes before getting back on my ride.

I have since joined the Facebook page of the club and plan to become an official member.

After riding some more that same day and then heading back home, I saw two men dressed in kilts near an intersection. One had a bagpipe and the other had a snare drum. I decided to go over and talk to them.

I discovered that they were waiting for one of their ex-cop friends who was doing a long “memorial” run to reach where they were. They were going to serenade the cop and his fellow runners as they arrived.

We weren’t sure when they were going to arrive, so I asked them if they would treat me to a little song. The video below shows what they played. I absolutely love bagpipe music.

This morning, I went for a 25 mile ride into Provo Canyon. This had become one of my favorite rides here in UT so far. It is uphill for about 12 miles, unless you extend it beyond the river section. This morning there was a stiff headwind on the way out which made the climb even harder. I wasn’t super strong. However, the thought of what would happen when I turned around to go home kept me going.

The views of the rapids of the Provo River and the mountains, cliffs and waterfalls are terrific. I took the pix below with my cell phone at my turnaround point.  It had been nice observing how the colors on the mountains have been changing as we head into Fall. 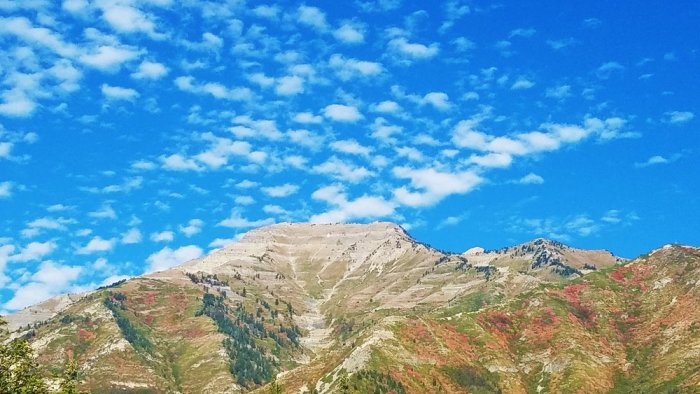