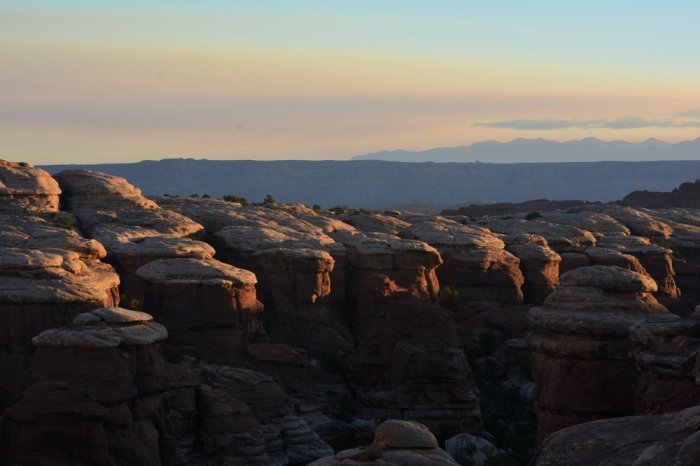 I have visited another world. 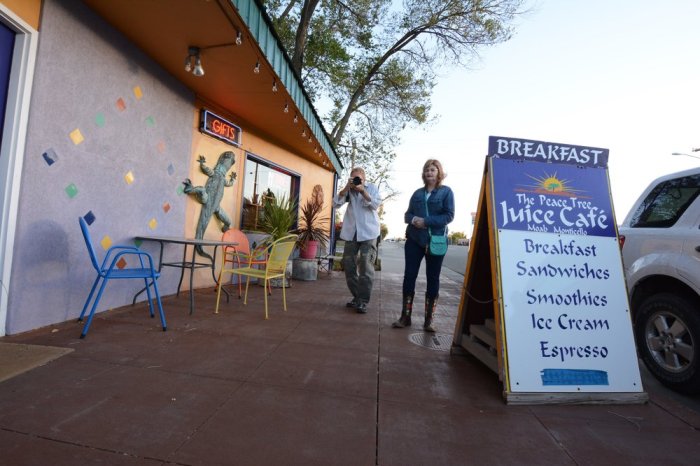 Abby patiently waits while Richard and I photo geek out before dinner in Monticello, UT.

No, I am serious. I have visited another world. I have been to Canyonlands National Park in Utah. It is one of the MOST AMAZING places I have ever been. More on that in a bit.  Speaking of amazing things, the reason I went there was to see my friends – Richard and Abby.

As if going to Canyonlands was not enough, I was able to do it with my good and long-time friend, Richard Barron, photojournalist and photographer extraordinaire.

Richard lives in Oklahoma with his beautiful wife Abby. They travel out this way frequently around their anniversary. Abby was kind to allow me to intrude and borrow her husband for a wonderful day at the park.

We both arrived in Monticello around the same time Sunday evening. We had a nice dinner at the Peace Tree Juice Cafe. After dinner, we went back to their hotel to get Abby and their doggies settled in room. Then Richard and I drove 30 miles north to the Wilson Arch to do some night photography.

About 3 miles away from the arch, we started seeing flashes coming from the general area of the arch. Keep in mind it was pitch black. As we got closer we saw more and more flashes. Upon arrival and getting out of the car, we realized that there was another photographer there and he was “painting” the arch with his flash as he was taking pix.

Richard and I decided to use those existing conditions and started taking pix with the other photographer’s flashes going off during our long exposures.

This photo was about a 30 second exposure with the added light around the arch provided by another photographer who happened to be there at the same time as us. If you look carefully, you can see where the photographer is in the photo.

Richard and I spent about an hour and a half shooting and chatting with the other photographer, who was very nice. We had fun adding colored light to a few of our photos with Richard’s malfunction flashlight. 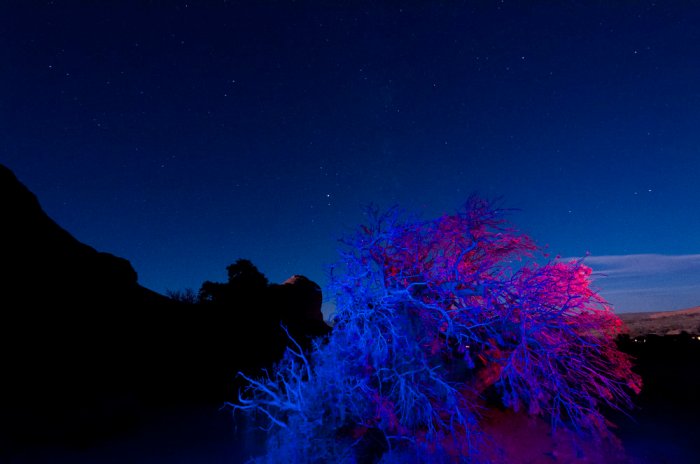 Another long exposure allows for a blurring effect on the clouds 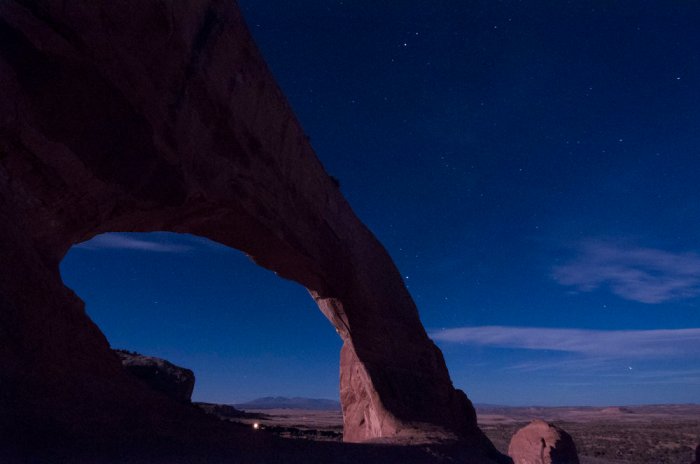 The moon was full on this night which is why you can so clearly see the clouds. Our night pix were impacted by the full moon and my desire to have the Milky Way highly visible in the arch shot was foiled.

Below are some more of the pix from the night shoot and I also added some from my trip into Monticello in the daylight.

After Richard and I finished our night shooting at Wilson Arch, we drove back to his hotel to turn in and get some rest before our big day at Canyonlands on Monday. We decided on the ride back to the hotel to get up a 5am and leave for the park so we could be there at sunrise.

THAT WAS A GREAT DECISION!

It was good decision to leave early because we arrived at the park with the moon still out and were able to witness the sun coming over the horizon and illuminating this most wondrous place called Canyonlands.

I snapped a few shots on the dark drive in. Below are a couple before we arrived at the Elephant Hill trailhead. 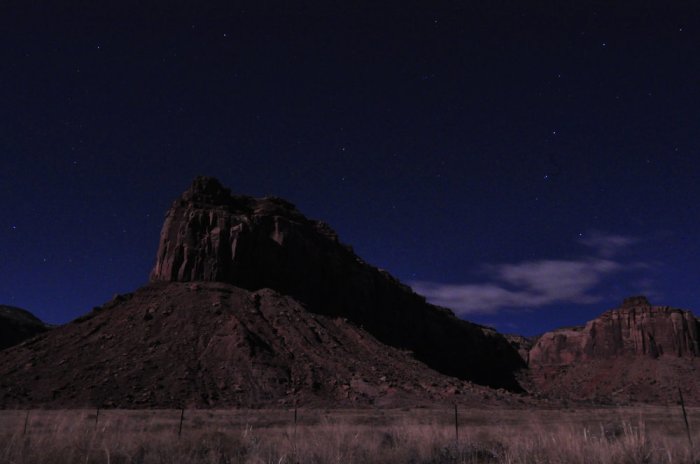 Note how bright the clouds are due to the moon

When we arrived at the trailhead, we were super excited to get started on the trail and to take advantage of the sunrise that was about to be upon us. But before that happened, we worked a few moon shot angles. The one below was my fave.

The sunrise between two huge boulders

Both Richard and I began feverishly snapping pix in the first glimmers of light. I was thinking this is the beginning of the day, and at this pace, we will not make 1 mile of hiking in the day, let along the 11.5 miles we ended up doing.

Obviously, I love taking pix. And if you know Richard, it is the same for him. However, the thing that I enjoyed most on this day, was the time I spent with Richard. We told stories, reminisced over the past, and laughed. We talked about some serious things, some sophomorically stupid things, music, friends, relationships, food, movies, and had lots of improvisational banter.

Love love love this snap that Richard took of me in the middle of our hike! He so good!

Below are a variety of pix from the hike. 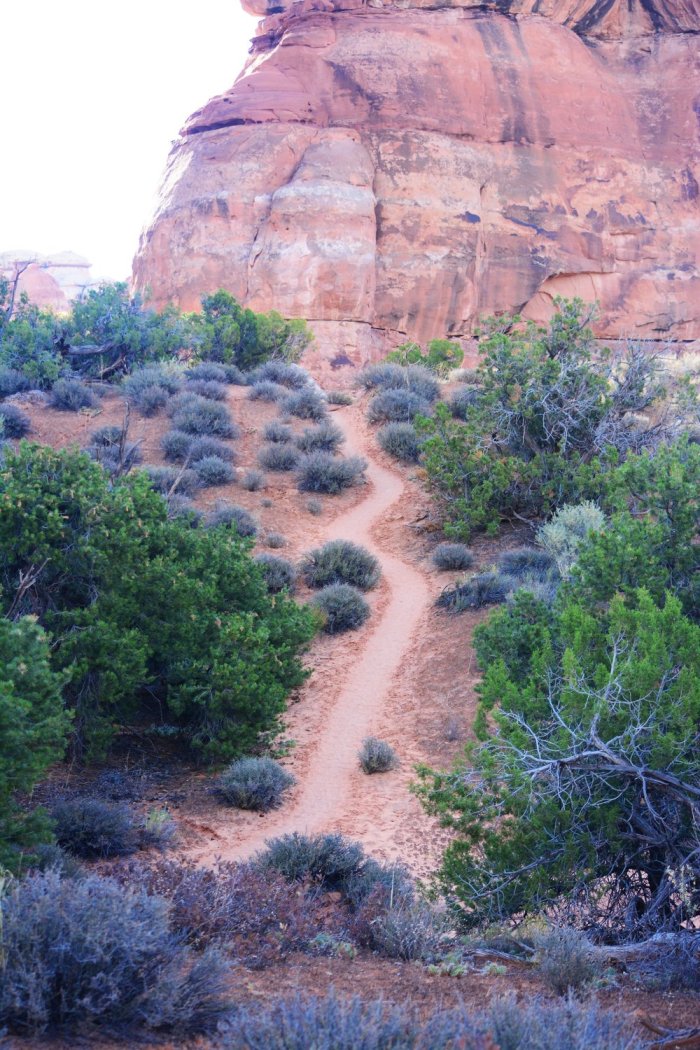 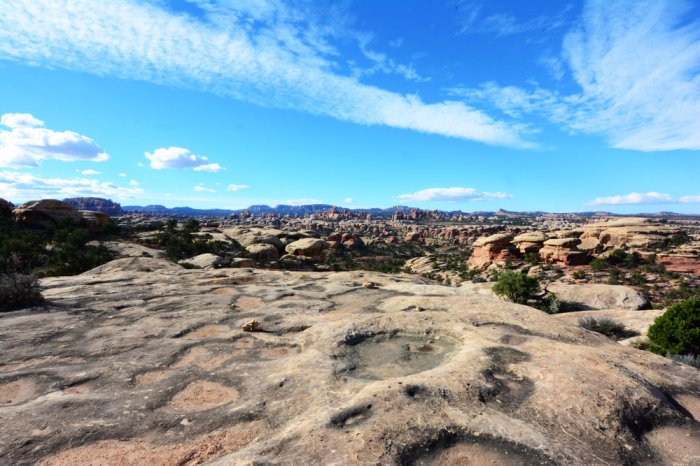 One of the key highlights of the hike was arriving at the Joint Trail. Richard, who has been at the park many times, had never been to this trail. So it was a new experience to us both…and it was definitely worth the hike to get there.

The entrance to the Joint Trail was a tall space between two HUGE rock formations.

The entrance to the Joint Trail from the other side of the initial “foyer” area. 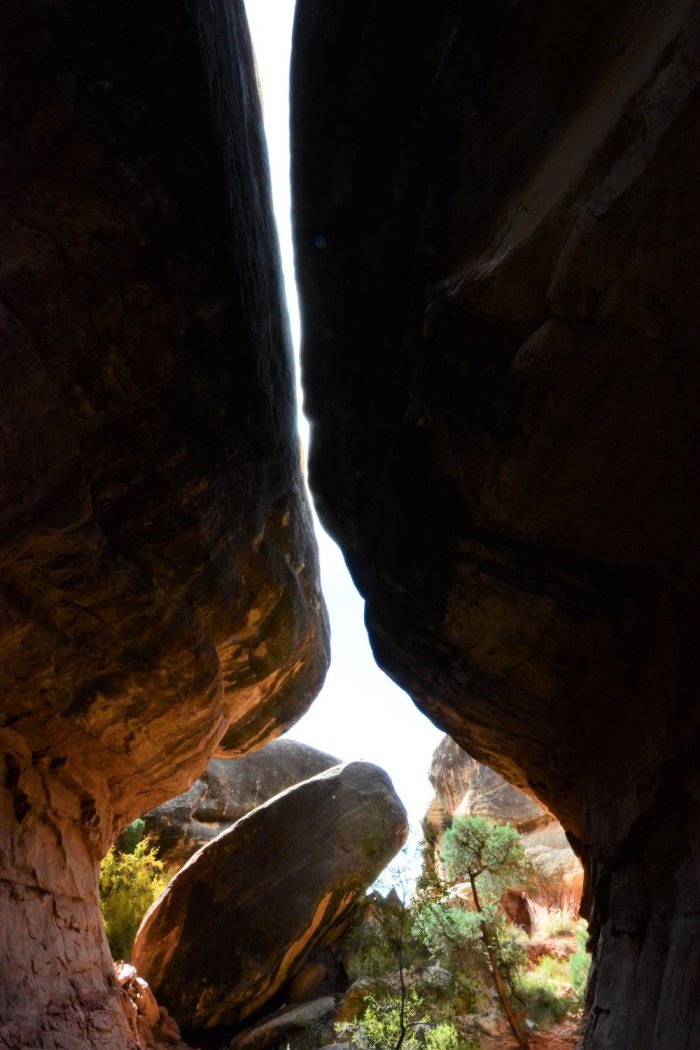 Love this shot that shows the fissure between the formations and then this gigantic rock that fell at some point.

We had a great time shooting and exploring through the cracks between the rocks. Richard tested the limited to see how far he could go. We found some nice hidden areas and love taking a bunch of pix. While I have more Richard photos later in this post, I wanted to share this one below as it really tells the story of how tight the space is.

For perspective, know that Richard is a thin man

When photographer friends get together, they take lots of pic of each other. Richard and I are no different. Below are a few from our visit together. I know he has many pix of me from the hike and I am looking forward to seeing them. 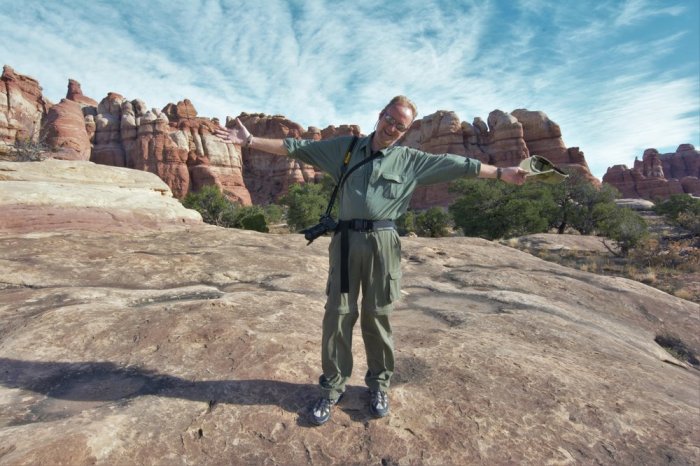 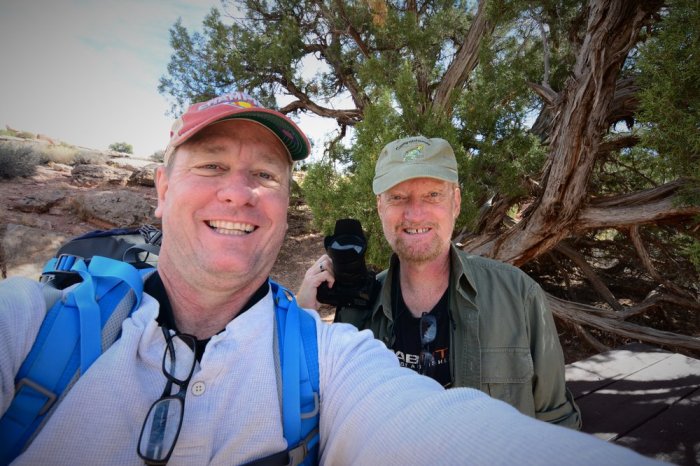 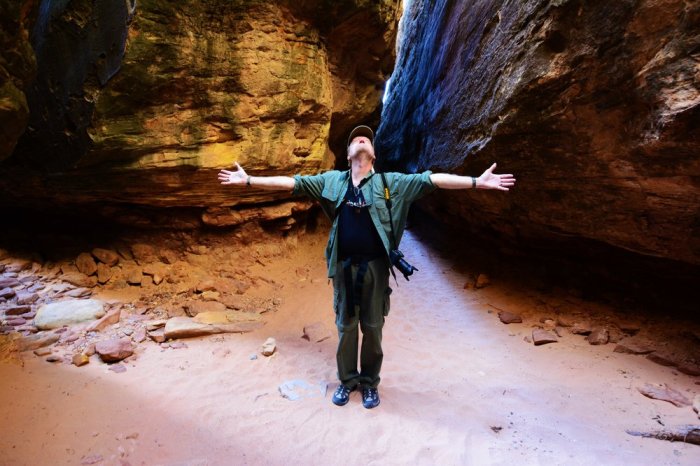 Once we completed the 11.5 mile hike, my feet were sore. My body was not overly tired, but my feet were sore. I developed a big blister on my left foot. As we were driving out of the park, we had to stop several time for even more pix. The first stop was to see the rock climbers.

I love the scale and perspective provided with this shot. There are two climbers shown here and they were only about half the way up the climb. If I pulled back much farther on the shot, you would not be able to notice the climbers. 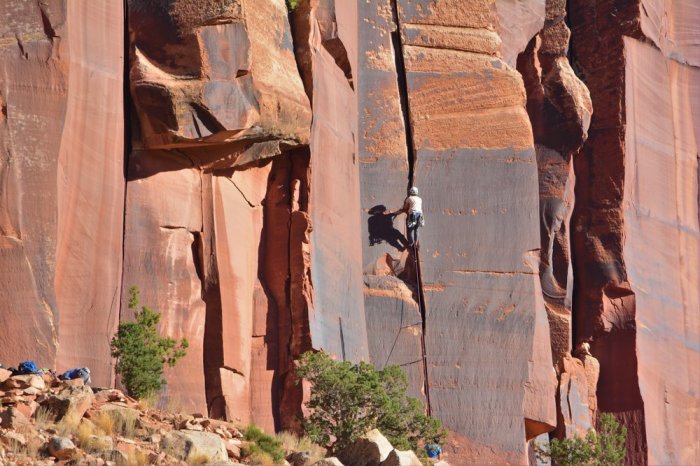 After shooting the climbers, we saw the fall colors across the street that were following a river/stream. We then drove a bit and became even more intrigued by the color, so we had to pull over and take even more pix.

After these pix we were done taking snaps. We enjoyed the drive back to Richard’s hotel. After greeting Abby and a few hugs, I made my way back into the van and began the journey home. I was filled with great joy reflecting on seeing my friends, spending a marvelous day hiking with Richard, and realizing how I totally escaped the normalcy of every day life during this brief and poignant trip.

I am very grateful for the friendship I have with Richard. He is truly an incredible man. He is smart, funny, talented and kind. As I was full of happiness on the drive, I was blessed with an amazing sunset. And yes, I had to stop and take a few more pictures.

On the way home somewhere on Highway 191 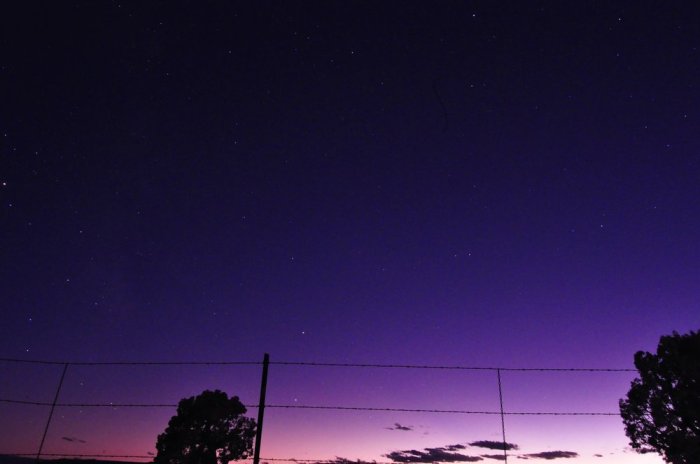 Somewhere a little farther down Highway 191

I can’t wait to go back to Canyonlands.

I also can’t wait to see my friends again.

Another pic of yours truly by Richard

2 thoughts on “The Wonder of Canyonlands”

Shining in the Dark