I was able to do them all in abundance on a camping trip this week. While we only camped out for one night, we sure got to do and see a lot!

We decided early in the week that we wanted to get away for a quick camping adventure since we had no children in the home for the week. So we packed Wednesday night and left Thursday morning and headed toward Kamas, UT and beyond. The map shows the journey.

We passed through Provo Canyon, Deer Creek Reservoir, skirted by Park City and then started Climbing mountains past Kamas until we hit our destination. We were not sure where we were going to camp. Part of the adventure was trying to find a place without knowing anything about the area.

The drive there was really nice and very rural. We climbed the whole way and ended up at around 9600 feet. Along the way, we saw a pull out for the Provo River overlook. I was shocked. I had no idea that the Provo River, the one that I see almost every single day where I love, extended this far east into Utah. The views was quite beautiful. It felt more like Oregon than it did Utah.

After we left the overlook, we drove and climbed a bit more. We were using Mirror Lake as our directional point, but we never actually made it there. We got excited when we passed the Upper Provo River Falls. Almost 70 miles from home and our “version” of the Provo River, we saw off the side of the road, an amazing waterfall.

We did not stop because we wanted to secure our camping spot for the evening first. We saw one campground and drove through it to no avail. Not a single spot was open. We then found another – the Trial Lake Campground (shown on map below).

We did not have a reservation but drove around and noticed there was 1 spot in the whole area that had 1 night open. Yep, that was the night we were there.

When we were finally able to speak with the camp host, she didn’t even realize she had a one night opening. At this time of year they are booked solid until the start of school.

We were thrilled to have a camp site. We quickly set up camp and then did some exploring around the camp and also to some nearby areas of interest.

Our first stop after leaving the campground was to go back to the Upper Provo Falls which was a few miles away. Within 100 yards of the road, Upper Provo Falls is a majestic, high water volume (at least at this time of the year) cascading waterfall that spans several hundred yards. There is a decent altitude drop over the span of the cascades, I could not state an accurate guess of the altitude change.

The photo below show the three major drops along the span of cascades.

Both Ann and I spent about an hour here taking pictures of the surroundings and each other. It was a bit chilly and it was also a bit rainy and that ended up cutting our time short. This area would certainly be an amazing respite on a hot summer day.

On the way back to the campground area, we got distracted by another wonderful part of the Provo River. We found an area with a beautiful waterfall and we had to get out and play in it.

After playing in the river some more, we decided to do some more exploring. We new we were close to several trails so we tried to go to the Crystal Lake trail head. The parking lot was slammed and people were everywhere. We kept driving and came across a gravel road. We decided to drive down the road. It was like a logging road but there were periodic campers along the way.

We then saw a sign that said we were in a Federal Fee Pay area. We had no idea where we were but we kept driving. Then after several miles and some winding descent, we hit the jackpot and came across a most beautiful lake that was half lily pad (we call them lily pads, but I am sure they are not lilies) and half water. To the right was a beautiful stream, which you see as the first photo in this post and to the left was the lake.

I am posting a vertical version of the stream. I like both the portrait and the landscape versions, so I am sharing both.

When we made it back to camp, it was time for dinner. We decided to try some of the new dehydrated packs that I purchased. We have used the Mountain House brand several times and really like it. We thought that we would try some other brand to see how they stacked up.

The three brands were Trailtopia, Refuel and Good-to-Go.

I used my handy dandy Jet Boil to heat the water. We added boiling water to each ouch and then distracted ourselves for about 20 minutes. We were very excited to open them up and give them a try.

The first we tried was the Trailtopia Homestyle Chicken and Rice. Ann took the first bit and her face said it all – it was bad. So I quickly sampled it figuring that she was exaggerating how bad it was.

As soon as I put the food in my mouth, I knew something was wrong. Very wrong.

TBH, it was so bad I could barely swallow. I cannot describe the flavor, but it did not taste like anything “homestyle” that I have cooked. It was repulsive. Yes, that bad. I mean really, really bad.

I am not trying to be mean to Trailtopia. I am hoping I had a bad pouch. I am hoping their other products are better. But I cannot imagine anyone eating that meal except as an alternative to death.

The next one we sampled was the mushroom risotto. It was a bit dry but there was acceptable flavor. I think we should have added about another 1/4 cup of water. Ann liked it more than I did.

The last to be tried was the teriyaki chicken. It turned out to be pretty good. We ate the whole pouch. We happened to have some fresh pineapple with us and that went very well with the dish. It was by far, my #1 of the three. Ann felt that the risotto and the teriyaki were close on her rankings.

After enjoying some time around the campfire, we decided to turn in for the night. Due to snoring, we slept in separate tents. It was cold.

Ann had the two big heavy sleeping bags, an air pad and a foam pad. At least that it was I thought.

I had 2 very, very lightweight bags and thin pad. We both were tired. As I laid in the tent, I was comfortable, with a very slight chill.

I woke up a bit after falling asleep to the sound of Ann snoring gently. I could hear the night sounds and quickly fell back asleep. Then at 2:30 am, I awoke and was freezing. I could not get warm with my flimsy and very then SUMMER sleeping bags. The temp was in the low 40s.

Since I thought Ann had both big, heavy sleeping bags, I decided to hop into the car to see if it was warmer. No luck.

At 4a, I decided to turn on the car for about 20 minutes to get some heat. It worked and I fell asleep until about 6:30. When I got up, I decided to start working on a new fire and cooking one of the highlights of camping: camp breakfast.

When I went to the back of the car to get some more wood, I saw that there was one of the big heavy sleeping bags.

I thought Ann had them both. Turns out, she was being generous and was letting me have one. Would have been nice if I knew that. I would have slept like a baby with that thing!

To make matters worse I also remember that I had a camo jacket and pants in the back that also would have kept me very warm. Oh well. It’s kind of funny on this side.

I was able to get the fire started after a bit of wrestling with the kindling. And I started the breakfast while Ann was still sleeping in her tent.

We broke camp at about 10a and headed out for the day’s adventures. At first, we thought we would go back to the Crystal Lake trail head to try that hike again. We tried the day before and it was slammed. Well, it was even worse on Friday. They had overflow parking that lasted at least for two miles. The hiking here must be amazing. We decided to come back mid week and see if it was any better.

So our alternative was to find another area. We started driving toward Mirror Lake. Moments later we saw a beautiful lake off the left side of the road and decided to pull over to check it out.

Out in the middle of the lake there was a fly fisherman. I love that and tried to get some good snaps.

As Ann and I were walking around the shore of the lake, we could see many Rainbow Trout swimming around. Ann actually was able to grab one by it’s tail.

We decided to walk around the lake and were very pleases with the trail. We found a few fun additions such as several smaller bodies of water, another “lily pad” pond, and many gorgeous views.

I am going to end this post with a bunch of the pix that Ann and I took of each other and even a selfie or two.

One thought on “Eastern Utah – A Whole New World”

The Self in the Weeds 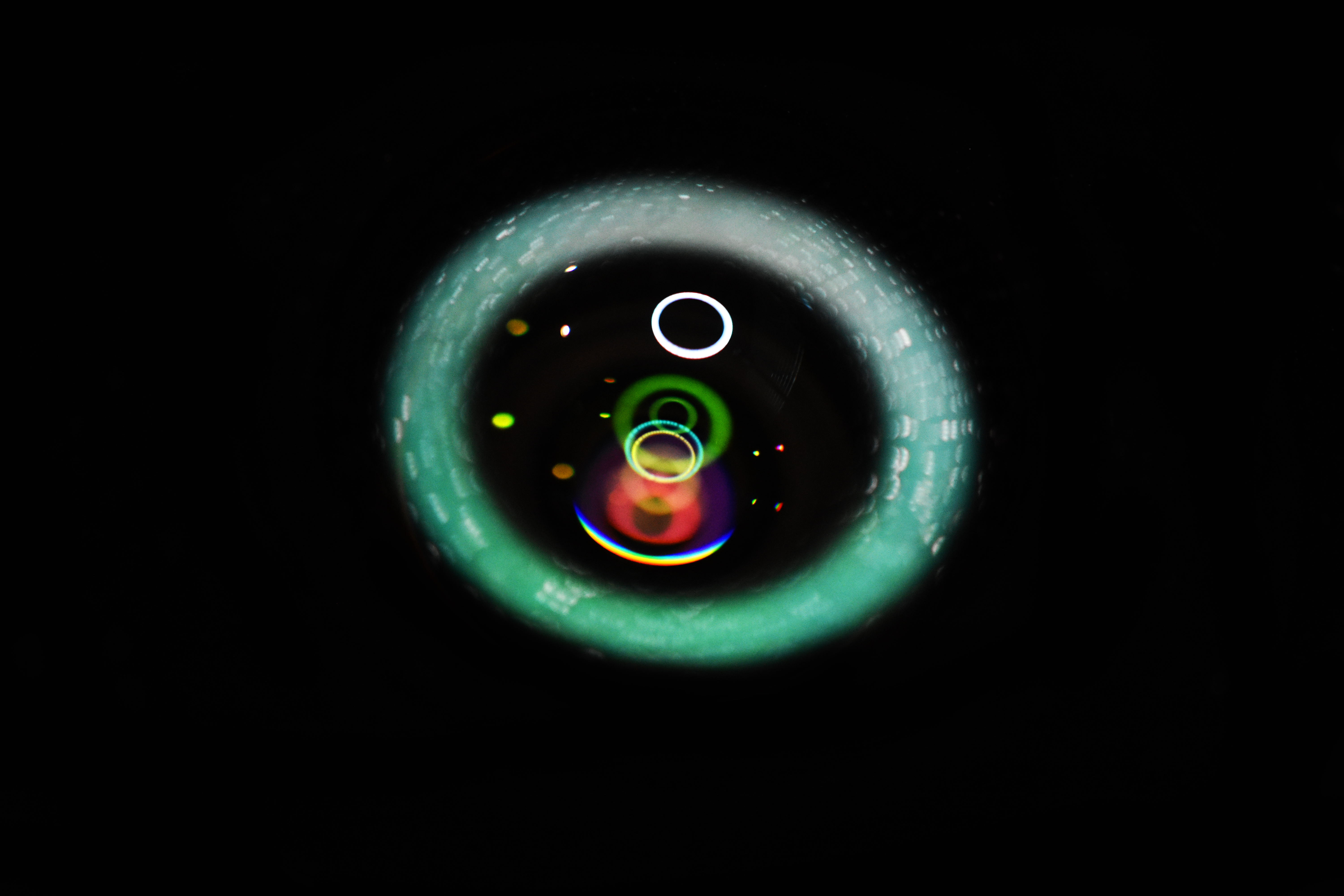